Working on my Poker Face -_-

As many of you have already heard, online poker has effectively been shut down in America for the time being. The DOJ has seized the domain names of the major U.S.-facing poker sites and indicted many of the owners. This news came with basically no warning and has sent shock waves through the entire industry.

Tens of thousands of poker pros across the United States have been blocked from playing on the sites and even from accessing their funds. Most of my online bankroll is at PokerStars. PokerStars reps have informed all players that their account balances are safe, and I believe them. Most likely, it will just be a matter of time until funds are released, much like in the neteller debacle a few years ago.

So, with this huge shakeup my plans of pursuing Supernova Elite on PokerStars have obviously been thrown for a loop. For the time being, I am planning to operate primarily in “wait-and-see” mode. This does not mean I will be sitting on my BUTT doing nothing, however.

I am planning to play live at Canterbury Park a few times a week to keep my game sharp and to keep the income flowing. I was actually there last night and met fellow online pro Brian “Bicyclekick” Clark for the first time in real life. The local news was there covering the online poker story and did an interview with Brian: 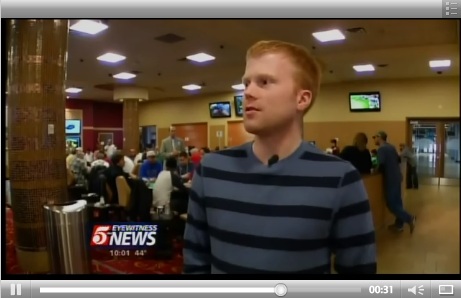 In addition to playing live, I am getting active politically and calling my senators and congress people. Check out this link for the general action plan. I will admit that I have not been very politically active in the past. So that combined with my general introverted-ness, I was pretty nervous making my first couple of calls.

I have learned that the calls they receive through out the day are basically like a straw poll. They just tally the number of calls they receive on different issues to rank them in order of importance. There is very little conversation involved. Basically they listen to my spiel, and then say, “Thank you I will pass that on to congressman xyx”. I am planning to continue making calls at least 2-3 hours each day for the next week.

My Spiel (feel free to modify and use!):

Hello, I am calling about the recent indictments and subsequent shutdown of the major online poker sites serving U.S. Customers.

I am an American and have played online poker for the past seven years, professionally for the last four years, and have paid taxes on all my winnings.

In addition to having my income stream abruptly cut off by this DOJ action, I also have several months worth of income that is now frozen in the poker site accounts. This is my property, not that of the online poker sites, and I’d like to be assured that my money is safe and that I will have access to it in a timely manner.

On the legislation side of the issue, studies have concluded that the U.S. tax revenue from online poker could be upward of $34B over the next ten years. In this time of huge budget deficits, I believe that the U.S. Government should be focused on setting up a regulatory framework to license and tax poker in the United States.

Thanks for your time.

In addition to making calls, the 2p2 “take action” thread has many great ideas, all listed in the original post on the thread.

I will be posting more updates as new information becomes available.

Thanks for reading, and good luck getting back on the tables. -_-